86 replies to this topic 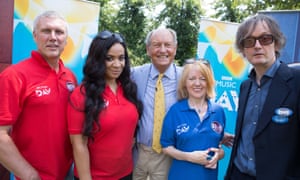 The Happy Mondays were disqualified from a special edition of the BBC’s Bargain Hunt after Bez broke the show’s rules by artificially inflating prices, handing victory to Pulp.
The programme, due to be aired on Friday as part of the BBC’s Music Day, featured the dancer and Rowetta Idah from Happy Mondays going up against Jarvis Cocker and Candida Doyle from Pulp.
Both teams were given £300 and an hour to buy three items from an antique fair at Kent showground with the help of experts, before seeking to raise the largest sum possible by auctioning them off at the end of the day.
Pulp made a series of disastrous investments in unpopular goods including vintage plates, and lost £95 overall after Cocker spent most of the budget on a Russian painting, which he described as a brilliant depiction of a “semi-nudist camp somewhere”. The bidding public disagreed and left the group in deficit.
They attempted to claw back some cash by including a signed vinyl copy of their Different Class album with a vintage gramophone they were auctioning, but this also raised limited interest from bidders.
Cocker, who bucked the show’s traditions by refusing to wear the typical branded polo shirts, said he had been “scarred for life” by his previous attendance at auctions. “I attempted to be in the antiques trade for about a fortnight. It didn’t really work,” he said.
The Happy Mondays team ended the programme with a profit of £8 after buying a “vintage rustic novelty mirror” in the shape of a horse collar, a biscuit tin and a mid-century record player. But a member of the Bargain Hunt production crew noticed the winning bidder for two of their lots was Bez’s girlfriend, breaking show rules and forcing the ending to be reshot – with victory handed to Pulp.
“It was a genuine error,” said Bez, who was made to pay the £8 profit out of his own pocket. “My girlfriend thought she was helping out.”
Doyle said: “I’m speechless.”